South Africa is like the best steaming pot of Cape Malay curry. It is everything at once. It is a burst of all the right spices at all the right times. It always leaves you wanting more.

Close your eyes. And imagine this. The fluttering of wings. The swish of the wind rustling in the canopy. The grand entry of the elephant. The striking thump of a kalimba running wild through your ears. The bustling magic that can be found in every small corner. That is South Africa for you.

Packed to the brim with energy, majesty, and the unending wild. Take this wild journey from the wild to the culture, from eye gouging scenes to lazy beaches marinated in the sun. It is everything you have ever heard of and even more. Let us take this dream of yours and make it real.

South Africa with its diversity regarding climates and wildlife can be an all year event. For the lovers of dry, hot weather the best time would be between November to February. Whale watching calls for the rains of July to November for the perfect visit.

The rains in the northern area can be the perfect viewing point for birders and the cooler lemonade months of May to September reel in the big cats.

The average cost for a person to travel in South Africa would be around 40,000 to 50,000 INR. But there are various differing experiences here which cause a variation in the prices.

A backpacker could get it done for much less. A visit to Cape Town might be the highest raise regarding money. The vivid city life will have you paying a pretty penny.

Indian citizens can apply for a visa for a business or tourism purpose for 90 days or less. This will then be regarded as a visitor permit. One must have a travel document or passport that is valid for at least 30 days after entry into the country.

They might even ask for a yellow fever vaccination certificate.

Traveling to the South of Africa will ensure a visit to Cape Town without raising a question. It might drain your pockets, but there is a lot to do even on a tight budget.

It is a catch for all, from artisans and entrepreneurs to people in thirst for a smoothie of cultures.

Colloquially dubbed as J’burg or Jozi, this town has changed faster than chameleons change color. There is a lot of vibrancy seen in this newly updated heart of South America.

After 20 years of decline, it has built the hopeful stance of a hungry lion. This is not the place to miss.

Best Places to Stay in Johannesburg:

Located in the KwaZulu-Natal province this destination is a rising star for tourism. It boasts highly of an Afro-Indian heritage. This city was revamped by the 2010 soccer World Cup. It is not too far from Johannesburg or Cape Town by flight.

It is an absolute mix of cultures and the architecture consisting of English Colonial buildings, Zulu murals, Islamic mosques and Hindu temples.

Best Places to Stay in Durban:

The southern coast of Africa is home to Hermanus, the capital of the whale watching program. This place, with its shallow and sheltered waters, is the holiday home for all southern right whales.

To aid all those in favor of cheering on the whales, a 10 km cliff walk with telescopes has been created. You can also get yourselves closer to the celebrities by boat.

Best Places to Stay in Hermanus:

This destination will stop your safari jeep right in its tracks. It is a mountainous region in the stretch between South Africa and the kingdom of Lesotho. The name Drakensberg is derived from the Dutch meaning, “mountain of the dragon”. This place speaks of otherworldly beauty and gives you the Lion King vibe that you crave for in your South Africa trip.

Best Places to Stay in the Drakensberg:

It goes without saying that this is one of the most surreal experiences that you will ever encounter in your life. And it takes the spotlight by a high margin. Nothing can beat the rush of sitting in an open-air jeep in search of The Big Five (lion, rhinoceros, leopard, elephant and cape buffalo). It will range from national parks to private game reserves. This one is an absolute must.

The Cape of Good Hope:

It is a short drive away from Cape Town and is one of the most pristine views ever discovered. It was named so by European explorers who had been sailing around the southern tip of Africa. The build-up of this view is a small safari amongst baboons and such. Right there staring into the Atlantic and the Indian Ocean is where peace was first found!!

This activity is a serious dose of adrenaline that shoots right through your body when you come almost face to face with the steely gaze and the world grinding teeth of the sharks. Many tourists describe this as one of the best experiences ever had. It sure has the right zing of a once in a lifetime opportunity.

A road trip with adventures brimming to the top along the Garden Route is known to be one of the trademarks of any trip to South Africa. It gives you the wild taste of everything from whale watching at Plettenberg Bay to surfing at Jefferys Bay. Also, along the route is the highest bridge jump in the world at 709 feet. There is a cable slide at 650 feet known as the “foofie slide” which is also an amazing experience.

The Cradle of Humankind

Not far from Johannesburg is a place called Maropeng which means “returning to the place of origin” in Setswana. This is dubbed as the place where it all began and is a home to millions of limestone caves rigged with fossils. This World Heritage site still has scientists on their toes. 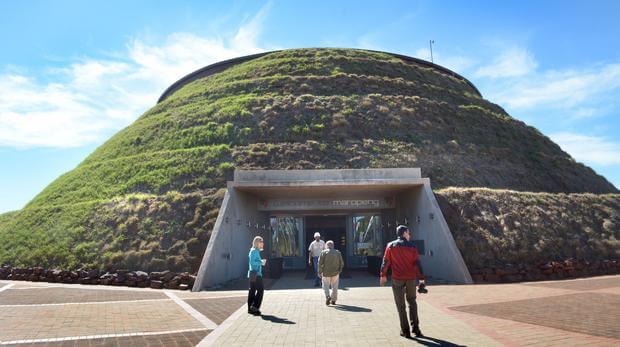 South Africa is a wild roller coaster ride from the very get-go but there are some things one must remember in order to have the experiences of a lifetime.

Don’t fall under the typical thoughts that state South Africa is an underdeveloped, rural area. While it has its crazy big share of landscapes and tribal experiences you can also find farmer’s markets and museums and malls here. For all of those hoping to see a horde of elephants invading your tracks, that’s does not happen.

Yes. It has always been a blind faith that this is the very tip of the beard of Africa but that is not so. The title of the southernmost point should rightfully go Cape Aghulas which is located about 109 miles the south of the Cape of Good Hope.

As with any trips away from your own land, one must be very careful with what they carry and where they venture out. A lot of times good neighborhoods and bad ones in South Africa are just a block away from each other. The rates of murders have gotten this place a lot of recognition but it rarely ventures into tourist areas. But it wouldn’t harm to be safe.

You might find yourselves tapping your feet in impatience while waiting for your food to arrive even in the biggest of cities here. But this is just how the country works. The service is not bad. Just embrace the slow wave of how everything works here. Relax in the seat of majesty.

Need to book honeymoon trip for southafrica please give a call