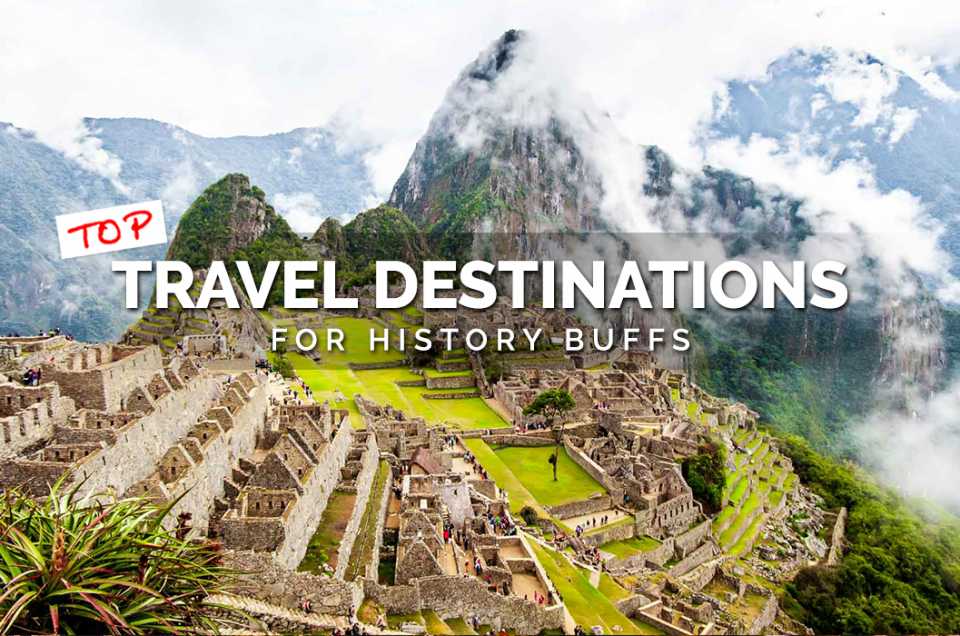 History may have been the most exhausting subject in the school’s educational modules, yet to a few of you, it meant everything. Often considered to be the boring sort of people, what most of the people don’t realize about you is the amount of knowledge you as history buffs have.

Like most children of our age, you may have been crowded off to ponder something that would have given you an actual career but the historian inside you still goes into flashback mode like you were one with the history that is being talked about, be it about the history of a place or a person.

Relatable much? MLMT presents the top destinations to visit to satisfy the History Buff inside you and learn more about the history of these places. Ready to bring your history textbook to life? Let’s get with it!

The cultural capital of Peru is entrenched in history. Cusco has its history going back to much further than 3,000 years. Drenched with history and Incan legacy, Cusco speaks to be a standout amongst the best places in Peru to find out about the local culture and discover what the landmass looked like when the first Europeans arrived and now it is a significant travel destination hosting about 2 million guests for each year.

The Inca were great designers, architects, and specialists who manufactured a system of streets connecting the far areas of the domain together. An immense amount of Inca and Colonial design and remains are spread all through the city.

When in Cusco must visit places are Centro Historica De Cusco, Sacsayhuaman, Sacred Valley of the Incas, Plaza de Armas, Tipon and Qorikancha.

Machu Picchu is an unusual, well-covered-up, and a great city in Peru. It is perfect for people who love history and hiking because behind the city is the Wayna Picchu Mountain which is awaiting your arrival. In spite of the fact that Machu Picchu was known to native populaces, it stayed unnoticed by the Spanish conquerors and the outside world till  Hiram Bingham ‘rediscovered’ it in 1911. This is the thing that makes Machu Picchu so exceptionality immaculate since the fifteenth century.

When in Machu Picchu must visits are Temple of the Sun, Room of the Three Windows and Intihuatana Stone.

Egypt has history galore, however, Alexandria is the real deal when it comes to being an ancient wonder. Egypt’s “Pearl of Mediterranean” Alexandria, also the nation’s second largest city is sometimes disregarded as a visitor’s spot due to the popularity of Cairo, but those who think this city has nothing to see are missing out on an experience worth experiencing.  The port city was built in 331 BC by Alexander the Great, the conqueror of the Persian Empire and later ruled by the first female ruler Cleopatra. The city’s Great Library held a definitive accumulation of old knowledge inside on its shelves, equaling Rome as a position of culture and intellect.

Egypt’s capital Cairo has become a tourist spot in recent years, all thanks to its great architecture, culture, and great weather. While you are in Cairo, your experience will be like you taking a walk through history. The treasures and sights this city beholds aren’t worth missing, especially if you are a history buff.

Greece is considered as the Cradle of Western Civilisation as it introduced the world with many astonishing advances. Athens is one such place where you can step back in time and appreciate the ancient Greeks’ knowledge, skills, and innovations. Having been present for more than 4,000 years, Athens has been submitted to about each type of government known right up ’til the present time:  monarchy, democracy, socialism, capitalism, even communism.

As a city going back to a vestige, Athens is an intriguing case of design and is home to an assortment of styles of architecture, from Greco-Roman to Neoclassical to present day.

When in Athens you cannot certainly miss going to a few places and they are: The temple of Athena Nike, Theatre of Dionysus, The Odeon of Pericles, Panathinaiko Stadium, Hadrian’s Library,  The Ancient Agora, The Roman forum, and last but not the least UNESCO listed Acropolis.

Prague is a city which has a very long and an intriguing history. The Prague history is distributed in three parts: Medieval times, the Golden Years period and 20th century. You can find history written on every nook and corner of Prague.

Prague is one of the few cities that didn’t get destroyed during the invasion of the Germans in WWII.

Over the span of the 1100 years, Prague’s development and improvement can be reported in the architectural articulation of numerous recorded historical periods and their styles.

China has to be a history buff’s paradise with 5,000 years of history. Beijing has been of significant importance to China since its unification in 221 BC has served as the capital of the country for nine decades now. Owing to this, the city has no lack of verifiable destinations when it comes to having historical significance.

Beijing is home to six UNESCO World Heritage Sites, it has royal palaces, sublime temples, and beautiful gardens to visit. While in Beijing, the city makes its power felt even when you are just walking through the streets, you. can feel the magnificence.

Must visit places in Beijing are The Great Wall, Forbidden City, Drum and Bell towers, Lama Temple, Temple of Confucius and the Old and new Summer Palace.

A standout amongst the most fascinating travel goals on the planet, Rome is an authentic stone megalith that has figured out how to hold its remarkable cultural identity even after so much modernization. The glorious past takes more than one or two peels until the glory of this vibrant city is all out there. Rome entertains without any bias whether you are a first time visitor or a regular visitor. Not many cities are as rich with history as Rome; the city has been a focal point of political interest and social advancement for more than 2000 years and has the sorts of attractions that will make sure to enthrall a history-cherishing person.

Must visit places when in Rome are: The Colosseum, St. Peter’s Basilica, The Forum, Santa Maria Della Vittoria, The Pantheon, The Baths of Diocletian and The Catacombs.

Budapest the capital and the largest city of Hungary is an emblematic of old-world Europe like no other city. Three words that describe Budapest the best are: Nostalgic, Cosmopolitan and Charming. Due to its charming front, Budapest has become a hot topic when it comes to tourism. It has something for everyone and History lovers are really in for a treat when in Budapest.