MLMT calls you, pleads you to step one step closer to the beauty that cannot be defined, Norway.

Glaciers giggle with sparkling water leaking from it gradually. Eyes shine to the frequency of the rays. The steep, jagged corners cut right across the arctic beauty. Norway makes the smiles crinkle and gets more in-depth. It does not let you sit in your seat in peace. Norway tickles at your foot, pricks you, urges you till you get up and run towards the call. Adventure is the first nature here.

The waters keep everything safe. Norway is beauty frozen in its place. Seals and whales bend over their backs to try to talk to you. The lights of the north give a quiet glimpse of the world we cannot see. Wonder beckons you closer. Norway invites you to come closer.

MLMT calls you, pleads you to step one step closer to the beauty that cannot be defined.

Norway is extremes. Your agenda decide when to go. If you plan to go in the winters of January and February be sure to pack four times the clothing. But the northern lights deserve all the numbness. March is the best time to go regarding day hours, and as April transforms into May, the country sprouts up with wildflowers and slushy meadows. June, July, and August are also great times for a visit. December is when Norway starts lighting up with Christmas and the northern lights.

A flight to Oslo from India will take about 30,000 to 40,000 if booked in advance. The cost of living here is higher than a lot of European countries. The hidden extreme of the world is not for everyone. The accommodation can be cut down via Airbnb, and the travel costs are cut down mainly by using the cross-country train hop instead of the flights. The cost of an average trip of 5-6 days without flight would go to 50-60,000 rupees.

Norway is one of the Scandinavian countries. It does not come under the Europe state. In spite of this, Norway is one of the countries that have signed up to be a part of the Schengen Agreement. This states a set of rules that have to be followed for a short stay Visa for all countries under it. There are various different provisions and requirements for people based on employed, unemployed, self-employed, retired or students. Schengen makes the process of Visa easier and more standard. 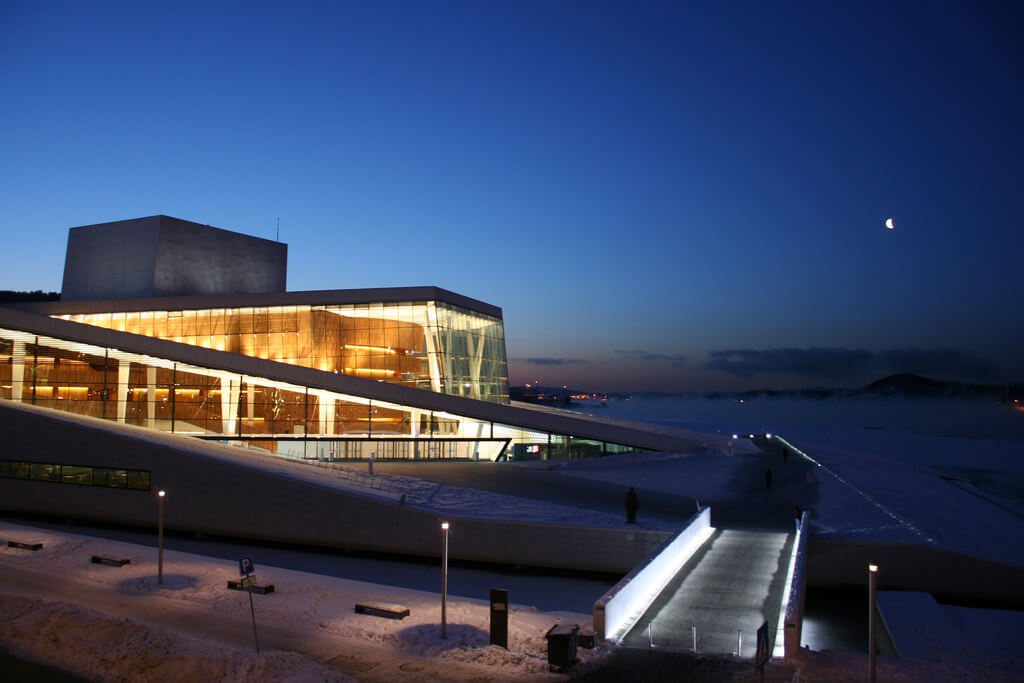 Reinvent, Rejuvenate, Inspire. This is Oslo. It is surrounded by the mounts and the waters on all sides. It is compact enough to fit in your purse. Take Oslo home with you. It is marinated for years in culture, refrigerated and finally cooking. It is the fastest growing capital in all of Europe. The urban metropolis is an ecological package. It is planned well, with excellent public transport and carries the lowest carbon footprint in the world.

The place that was once known for only hot dogs has now developed its taste buds and has found an affinity for fusion. The Icelandic-Korean fusion is hot as hell. No, literally. Peel yourself shrimp as you feast on the views.

Best Places to stay in Oslo 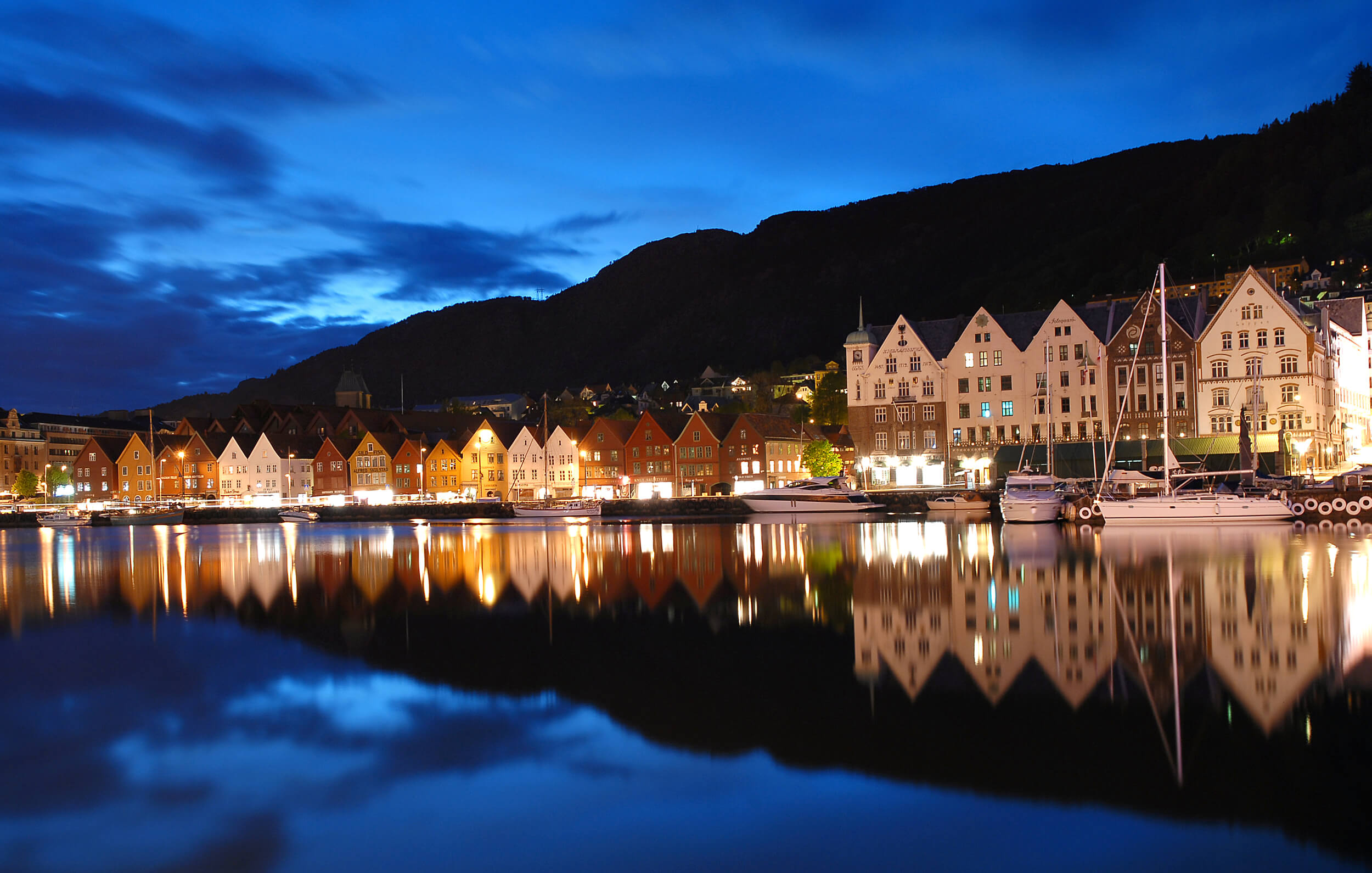 The hidden capital hidden in between the embrace of the seven hills and seven fjords is a pleasant and calming, serene place to be. The middle ages revered Bergen as one of the most critical port scenes of the country. The beauty here has been captured and preserved very well in the form of the wooden houses and colorful tiny houses lining the streets.

Thanks to the thousands of college kids in the region, Bergen is nowhere close to short of a bustling night food and bar scene.

Best Places to stay in Bergen

Beauty is an everyday thing for the people of Trondheim. It is casual, effortless, breathless. Try finding a more picturesque place in all of Norway. It is the best home points for your selfies and your Instagram stories. The city has streets that could accommodate cities worth of people on it. Space is a very cheap commodity here. It is also the home to the northernmost Gothic cathedral. The cafes and restaurants overlooking the beautiful views are elegant and sufficient.

The boats are pulled over, seagulls make you aware of their existence above your head. There is so much to see here. Take it all in.

Best Places to stay in Trondheim

This is a small town located about 400 km away from the Arctic Circle. It is often known as the gateway to pass into the Arctic through Norway. The polar atmosphere expands itself here. It used to be a big zone for seal hunting, trapping, and fishing. It has also been quite a prominent place regarding launching a lot of essential expeditions.

This is one of the best spots to view the Northern lights from. The big college scene here ensures that there is enough of an art and bar scene here.

Best Places to stay in Tromso

This is the Oil City. It is generally held in the list of the biggest oil extractors and providers in the world. Even though it is such a famous town, you will notice a lack of skyscrapers. It is full of wooden buildings that just add to the beauty of the place.

Even though it is not too developed regarding looks, the oil boom has made it one of the priciest places. Even for Norway. You can explore Lysefjorden from here. It will also lead to a classic hike to the Pulpit Rock, Preikestolen.

Best Places to stay in Stavanger

Writing about Norway and not writing about the aurora borealis is a crime. This is the spectacular phenomenon that is experienced in the long night of the winter from October to March in the Arctic. They spring up in colors of green and white and resemble nothing. It is something else altogether. You have to really lucky to view this. This beauty is unpredictable.

There is no better way to venture into the Arctic than this. Take a sled, and ride throughout with a pack of huskies. Away from the din of the city and engine noises take the tour that makes you a local. This lets you go to areas not connected by roads. Experience Arctic fully.

This is the location of one of the biggest whirlpool in the world. It can be found in Nordland just about 30 km away from the city of Bodo. It has the strongest tidal current in the world. The speeds reach 37km/hr. When the flow is at its highest gigantic vortices are formed. This has existed for a lot of time now. It is a crazy thing to watch.

The Jostedal glacier went against the global warming and continued to grow until 2006. This was when it lost its battle against global warming. In 2007, this phenomenal place showed up. It is a humungous cave beneath the glacier. It is even known as an ice cathedral by some people. You should never venture out without a guide. The chances of a collapse are high.

This may be a dream for most people. To walk alongside the bears, but unfortunately, this has to remain a dream. The country is not a small, hidden, rural area. It is pretty developed and even has big roads with cars on it. There are no polar bears open and roaming on the mainland of Norway.

Norway is one of the safest countries to live in. The cities like Oslo, Bergen, and Trondheim are the most reliable. It is also relatively safe to walk out alone late at night. Other areas have some precautions but still are quite safe. Most crimes are house and office burglaries if any.

The weather in Norway is extremely extreme and unpredictable. You should always accommodate for the coldest and wettest of weather. You should always bring enough clothes. Even carry an extra pair while you are hiking. Summers also need extra clothes just in case things go wrong.

This is a dream for most people. People who come to Norway mainly come with the expectations of seeing these lights. This is the right country to be. But the lights are not visible from everywhere. There are certain cities and spots which let you get the best view of these lights. Look out for these places.